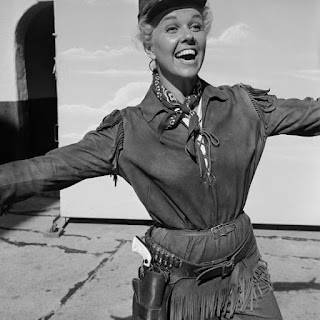 Have you ever seen Calamity Jane? Its the 1953 technicolor musical that follows the story of the wild west heroine with her sharp shootin', rootin' tootin' ways and her secret love for Wild Bill Hicock.


BUT, basics aside, have you ever REALLY watched Calamity Jane, and by that I mean Doris Day's extraordinary performance? She bolts off the screen like a ray of golden light all energy and purpose. As Calam', Doris fully embodies every ounce of the loud, bragging, arm flailing heroine. She is a powerhouse of acting. It's amazing when you see her move, when you hear her sing!

Doris' honey smooth voice was both soothing and invigorating, it could be lilting and soft or ramped up to full force, but never anything but perfection.

How bothersome then, that Doris' talents not just for musicals but comedies and dramas too have been overshadowed by her branding as the virginal all American goody two shoes, that has become a kitsch cliche at best and a false caricature at worst.

In reality she wasn't all apple pie. She was a women making her way in a male dominated industry. She was taken advantage of and betrayed by those closest to her (three marriages, one bankruptcy and an ageist Hollywood system) and pigeonholed into money making projects that kept her in a safe two dimensional bracket, that she somehow manged to rise above and shine. 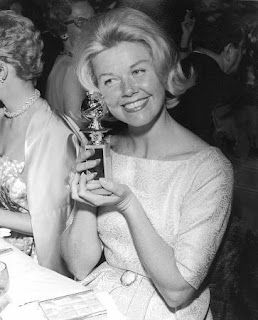 My appreciation for Doris didn't truly begin until my 20's. Before that I'd always assumed she was too blandly wholesome. My god, how wrong I was! Watching Calamity Jane for the second time as an adult I realised I too had massively underrated her. I was grabbed by her vitality and her ability to go full force into a character while never veering into absurdity. She owned every scene she was in, her very physicality projecting her beyond the surface of the screen.

Spending time with her well known later films, those screwball 60's romance comedies she's so well known for, its wonderful to see how she embraces the campness and runs with it. These films cemented the whiter than white stereotype associated with Doris but she made what could have been flimsy character roles into memorable iconic performances that defined an era of golden Hollywood and popular culture to come. 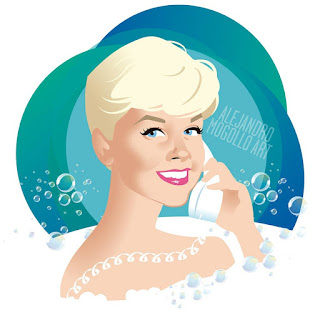 Doris Day has been there my entire life, a legend hidden somewhere in California. It was enough to know she still existed; one of the Hollywood greats. I fully respected her decision to retire in the 1980's and focus on her charity work for the Doris Day Animal Foundation, yet when she released her album My Heart, at the age 89 it was exciting to hear her lovely voice once more and know she was still working her magic.

To know that Doris has gone is a great loss. I hope that people look back at her catalogue of work and feel as wowed as I have. I hope she is always remembered for the right reasons, for her undeniable talent and skill as a performer and the charity work that will continue in her name. I hope that right now Doris is having the best time, her glorious mega watt smile lighting up the heavens, because, after all, who can make 'the sun shine brighter than Doris Day'? 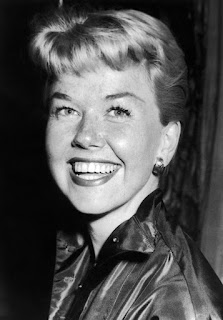 Posted by Gemma Parker at 03:32 No comments:

I've been getting work ready for The Hidden Pin Up's next outing taking place as part of the Sexuality Summer School 23rd May at the University of Manchester.

The school is a five day event that discusses and debates queer and feminist sexuality studies bringing together researchers, international scholars, filmmakers and artists and I'm really thrilled that we are taking part in this year's programme. 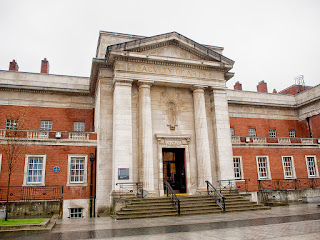 The performance is taking place in the magnificent Victorian Samuel Alexander building which epitomises historic western ideals of beauty with it's neo-classical columns and sweeping architecture. I cannot wait to see our dancer and spoken word artist perform against this backdrop highlighting centuries of stereotypes and misconceptions of just what beauty can be.

I recently came across this brilliant short video made by BBC 3 and in this film alone we revisit ALL the preconceived ideas and fetishes attributed to women of colour that have already been touched on in my research for The Hidden Pin Up. The comments on this video in themselves are an education!

Taking this as a cue I have been adding new embroidered feathers to the hessian burlesque fans that Lenai from the House Of Ghetto will be dancing with. The fans already hold a number of embroidered true stories collected from women of colour about their experiences of stereotyping and marginalisation and soon one fan will be filled. Here's just a few of the new embroideries so far, 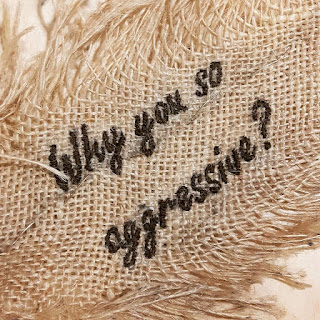 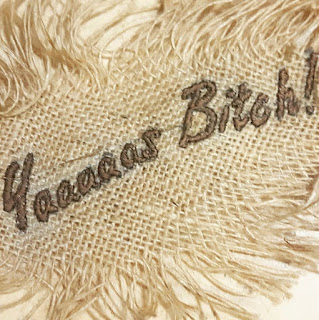 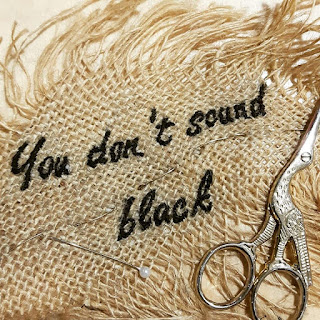 Myself and Darren Pritchard, the project's choreographer, dancer Lenai Russell and spoken word performer Justina Aina will be staying after the performance next Thursday to chat to audience members about the work and give you a chance to see the fans and related Hidden Pin Up artwork up close.

The performance is free to attend and begins 7.15pm. I recommend you arrive earlier to avoid missing anything and grab a good spot. Hope to see you there!
Posted by Gemma Parker at 10:10 No comments: