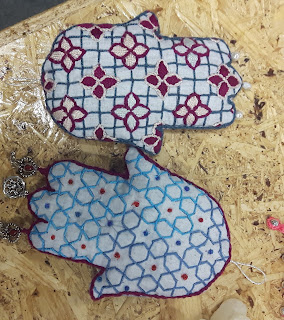 Today I began my week long residency at Manchester Jewish Museum, where I am using the collection to research women and textiles as part of my project about feminine pursuits. I started the day by going over my main objectives for the residency with Creative Producer Dr Laura Seddon. They fell into three categories:

The history of women's needlework:
Jewish history and culture
Identity through practice
Reasons and purpose

The Universal language of needlework:
Finding similarities within artefacts and stories
Patterns
Traditions

Artistic merit:
Looking at needlework's significance
Place in culture
The attention given to each piece

We then went through the museum's catalogue looking for items that fit the criteria. More on this tomorrow when I will be looking at selected items in the collection and finding out more about them.

The afternoon was spent with the museum's Women's Textile Group made up of Jewish and Muslim women who meet once a month to create work together. Meeting them all was brilliant fun and they lived up to their reputation of enjoying a chat!

The session began by the group sharing their most recent sewing based on hamsa hands, a symbol found in both cultures. Their work was beautiful and intricate, and showed off each woman's skill and design flair. Some of the pieces were still being worked on and it was pleasantly relaxing to see people stitching while we talked. 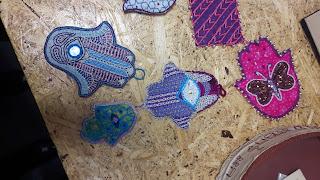 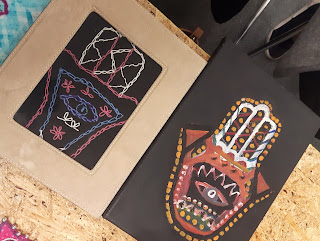 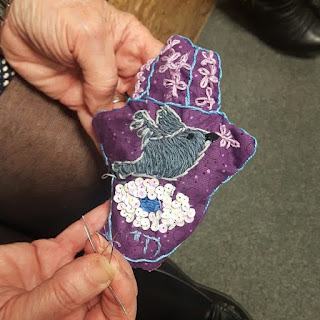 Laura then asked the group to give their opinions on some items she and I had already looked at that morning to see if they could shed more light on them. These included a blue and white embroidered cotton envelope we couldn't explain, a Matzo dish, used for Matzo bread during Passover, and a hand stitched postcard from the First World War.

This ignited much discussion and the group took great interest in the items, studying them with magnifying glasses and keen eyes. The mystery of each was soon solved. 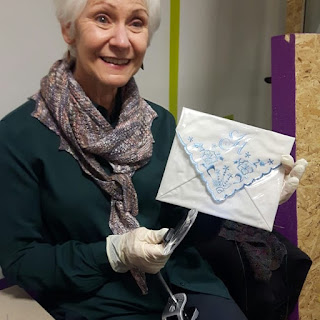 The envelope was an 'Afikoman' bag, used to hold Matzo bread which is hidden somewhere in the home during the Passover supper or 'Seder'. Children are encouraged to find the bread and get a reward. The Afikoman bag is sometimes monogrammed with the child's initial, as this one was with a letter 'H'. 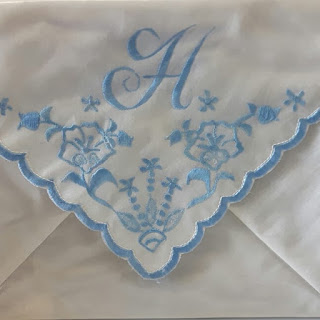 The Matzo dish with it's delicate embroidered hebrew and lace cover was indeed hand made and some member's even translated the inscription which related to the eating of the bread. We all thought it was very well made, including the little buttons that fastened it to the dish. However as one lady pointed out the fabric was perishing in places which might account for one reason why hand crafts aren't as valued as other arts, because of their tendency to deteriorate with time and use. 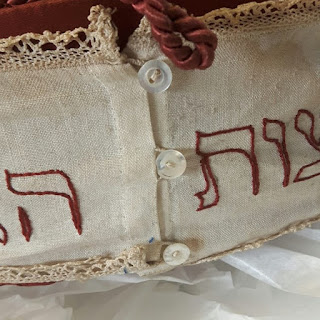 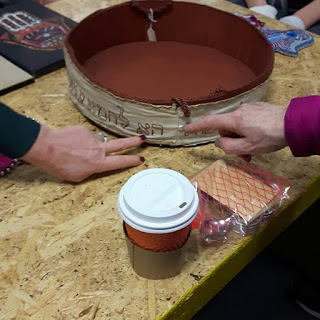 Lastly the hand stitched postcard got many ooh's and ahh's over it's pretty design but caused a stir when it was properly studied as it said 'To my dear wife, from your loving husband'. 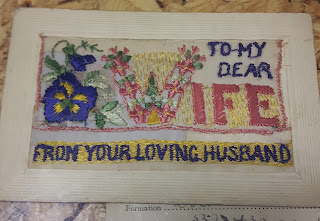 This started much debate over whether a man would have actually stitched it, as one lady said a solider wouldn't have done it himself in front of other men for fear of ridicule. This sentiment might have been a sweeping generalisation if we hadn't already witnessed two men react in similar ways when confronted with the idea of sewing for themselves. These included the male volunteer at the museum who looked perplexed and slightly fearful at the invite to stay for the group's meeting before leaving fast, and a staff member who made a clear point that he was , 'someone whose never sewn before in his life!'.

On conclusion the ladies decided on two outcomes. Either a nurse had stitched it on a soldier's behalf or indeed a man had done it by following the pattern that could just be seen beneath the threads. Either way this is a curious item with a mysterious backstory.

I then got the chance to ask a few questions and find out more about the group. Here's what followed:

Do any of you have a background or interest in needle work?

-At an amateur level. I was taught embroidery, sewing and knitting as a child but never realised it could be a profession.
-It was similar for me, it was a tradition. My mum made covers for everything in our house, including the double cassette player! When I showed her what we were doing in the group she said, 'you're just like me!'  and brought all her own embroidery down to show me. It connected us.

What made you want to attend the group?

-I thought it was nice to meet new people with a shared interest.
-We are all from different walks of life but the sewing connects us. It's a chance for peaceful dialogue. I attend various inter faith events and for me this is a similar chance to show what we share in common rather than what makes us different. Since we set up the group there has been visits to the mosque to meet the Imam and ask questions. That kind of peaceful dialogue is needed now more than ever. It brings communities together and allows us to learn from each other.

What do you enjoy about the process of needle work?

-For me it is mindfulness. I enjoy the colours, textiles and rhythm of the stitches. Its more about the journey than the end product
-A bit like Strictly Come Dancing!
-Yes! But really, like this scarf I'm knitting, I'd happily unravel it and start all over again once it's finished.
-For me, it IS about the end product. it means I've achieved something. It's self accomplishment and we should feel proud.
As women we are usually running after kids or care giving. It's a chance to give ourselves some time and it's good to learn a new skill.
-I started to sew again when I retired and I really enjoy it. It forces you to stop, there's no intensity, and you're doing it with people you wouldn't normally be in contact with.
-Before I started the group I saw it as purely embroidery initially, but once I got involved I saw all the other aspects it entailed [we had earlier mentioned creativity, relaxation and socialising]

Do you think men would enjoy what you do in this textile group?

-No. There's a fear of labels of what women do.
- My nephew is artistic and might enjoy the creative process but wouldn't want to join in the practical side of it.
-Men are competitive because they have to be good at what they do.
-I've found that there's a level of conversation in women's groups, but women's voices get lost when men are involved.
-Men like to do things on a professional level. Women are more chilled but men feel defined by what they do.
-Possibly men in the arts would be more open to what we do
-Men's voices are louder than women's in the art world.
-I think this subject can never be important to a mans life, however if we were a carpentry group it might be different.
-Women find it more natural to teach and are less judgemental.
-That's not always true! But in this group at least it is.
-We don't think twice of men as artists so why not embroidery?
I think it's professionalism verses home orientated arts and crafts.
-Well, everyone has to begin somewhere!

Would you still want to attend this group if it were mixed men and women?

-Yes!
-No. When women do things together they enjoy each others company, its more relaxed. I enjoy the the company of women more than men, but that's my personal preference.

The group meeting was very relaxed, with much laughter and a supportive atmosphere throughout. There was even a large box of luxury biscuits brought out near the end!... and the conversation didn't stop with the sewing; Families were asked after and children's progress noted. It really was an oasis of calm where chat about each other's interests and ideas, religion and culture brought the members closer rather than divided them. It was refreshing and uplifting and the fact that needle work was the catalyst that brought the group together cannot be ignored.

I found the whole experience fascinating and it has given me loads to think about. My thanks to the museum's Women's Textile Group for sharing an enjoyable and informative afternoon with me
Posted by Gemma Parker at 11:24